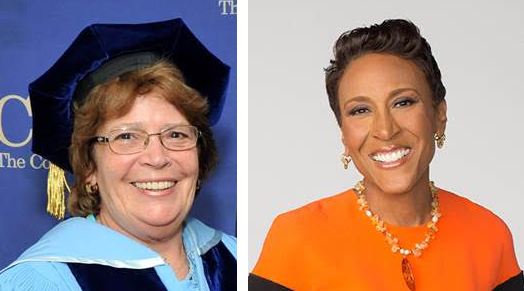 The following is from The College of New Rochelle:

NEW ROCHELLE, NY, April 18, 2016 The College of New Rochelle (CNR) will mark its 109th?commencement on Tuesday, May ???24, 2016?at The Beacon Theatre, awarding approximately 1,000 baccalaureate and masters degrees on students from its four schools and conferring honorary degrees on Robin Roberts (pictured above on the right), television broadcaster and co-anchor of ABCs Good Morning America, and Elizabeth LeVaca (pictured above on the left), Chair of the Board of Trustees at The College of New Rochelle. Roberts will give the commencement address.

Elizabeth Bell LeVaca has served as a member of the Board of Trustees of The College of New Rochelle for over 14 years and since 2013, as Chair of the Board. She will step down as Chair after commencement.

Under LeVacas leadership as chair, the College has undertaken many significant initiatives, including:

A registered nurse, LeVaca earned her bachelors degree in nursing and certifications as a clinical nursing specialist and as a nurse practitioner from The Catholic University of America and has been a member of Sigma Theta Tau, the Nursing Honor Society, for more than two decades.

Elizabeth is a past board member for the AIDS/HIV Services Group in Charlottesville, Virginia, the Hospice of DC, and the Martha Jefferson Hospital Foundation. She is the founder of the Ralph & Mary Fischer Bell Foundation that provides scholarships to various schools and organizations.

Robin Roberts is a television broadcaster and the co-anchor of ABC’s Good Morning America. Under her leadership, the broadcast has won four Emmy Awards for Outstanding Morning Program.

Roberts launched her new production company, Rockn Robin Productions in September 2014, which creates original broadcast and digital programming for ABC and other networks, ranging from documentaries, to lifestyle reality series and live special events.
Robin Roberts is an accomplished woman who has excelled in her profession, while also demonstrating tremendous strength, perseverance, and courage when faced with personal health challenges. She has used these experiences to help others in significant ways, and we are honored to recognize her as a role model who reflects the Colleges values of both professional achievement and service to others, said Huntington.

In 2014, Roberts received the Walter Cronkite Award for Excellence in Journalism, was inducted into the Broadcasting & Cable Hall of Fame, and was named one of Glamours Women of the Year. She has appeared on the Hollywood Reporters New York Power List multiple times, and was voted the Most Trusted Person on Television by a Readers Digest poll in 2013.

Her public battle with a blood and bone marrow disease and subsequent bone marrow transplant, inspired her to create programming that led to an increase in bone marrow donor registration. For this endeavor, she received awards and honors from many organizations around the country, including The Susan G. Komen Foundation, The Congressional Families Cancer Prevention Program, and Gildas Club.

Roberts joined ESPN as a sportscaster in 1990, where she stayed until 2005. She began contributing to the ABC News show Good Morning America as a featured reporter in 1995, and was named co-anchor in May 2005.

About The College of New Rochelle

The College of New Rochelle is ranked by U.S. News and World Report in the Top Tier among Regional Universities in the north and is among the Top 10 in New York and the Top 100 in the nation amongWashington Monthlys Masters Universities.?

Recognized as a Catholic College of Distinction, it has been named for five consecutive years to the Presidents Community Service Honor Roll, the highest federal recognition a college or university can receive for its commitment to volunteering, service-learning, and civic engagement.

Founded in 1904 by the Ursuline Order, The College of New Rochelle comprises four coeducational Schools: School of Arts & Sciences, School of New Resources (for adult learners), School of Nursing, and Graduate School.

The main campus of the College is located in lower Westchester County, 16 miles north of New York City. The College maintains seven locations for the School of New Resources in Brooklyn, Co-op City, the South Bronx, Harlem, New Rochelle, Yonkers, and at DC-37 Union Headquarters in Manhattan. Visit the Colleges website at www.cnr.edu.