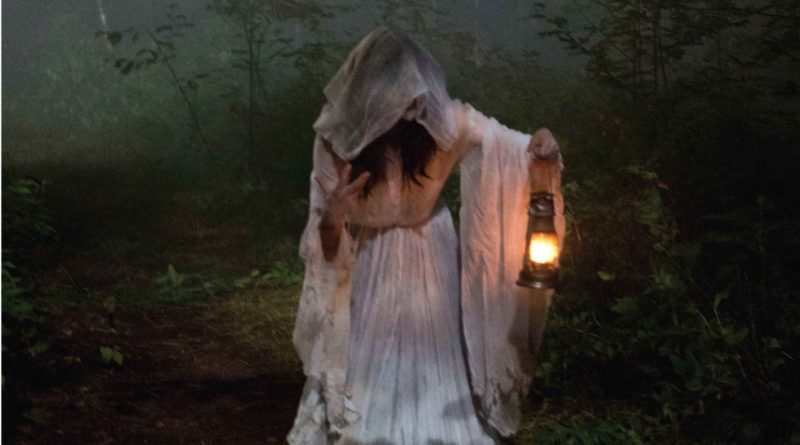 AND IT LOOKS SERIOUSLY EPIC!!!!!

If you don’t know what Buckout Road is, it’s a road that joins White Plains and West Harrison which has several scary legends attached to it.

You can learn all about it here:

If you live in Westchester, especially in White Plains or Harrison, you’ve undoubtedly heard some version of an urban legend about Buckout Road where locals still go to get spooked. The two-mile stretch of road runs from White Plains through West Harrison (is mostly in West Harrison), and used to look as if it were straight out of a horror flick.

Yup, flesh-eaters, witches, and the vindictive murder of a lover. Crazy stuff!

You can check out bedofnailz.com the complete website on Buckout Road which also came out with a book on the street’s haunted history.

Many generations of Westchester kids have gone done Buckout Road for a good scare. Some of the braver (or crazier) individuals have even spent the night in the wooded area of the neighborhood waiting to see if they can see ghosts or anything murderous.

It’s been touted as “The most haunted road in America.”

Back in 2011, I spoke with former New Rochelle resident John Pascucci who was working on a film that at the time was to be produced by Brad Clark and Ambush Entertainment.

You can check out my interview with Pascucci below:

The Legend of Buckout Road: The Movie

Like many Westchester residents, as a teenager John Pascucci and his friends would creep through the woods near the alleged haunted Westchester street, Buckout Road in West Harrison/White Plains, looking to be horrified.

I haven’t heard anything about the movie’s production since then until I saw someone share the trailer on Facebook today. And I’m kinda freaking out about it. Not only am I stoked that it’s actually coming out but the trailer actually looks really good.

So, I had to share it with you because I figured many of you would be just as excited as I am.

“A college class project on creation and destruction of modern myth, turns terrifying when a trio of young people come to realize the many evil urban legends surrounding New York States famed Buckout Road may, in fact be real,” is what the YouTube caption says.

The director,?Matthew Currie Holmes, is from Canada and Pascucci doesn’t appear to be attached to this film, but I can’t confirm that. I can confirm that Danny Glover is the movie starring as a Dr. Powell.

A college class project on creation and destruction of modern myth, turns terrifying when a trio of young people come to realize the many evil urban legends surrounding New York State’s famed Buckout Road may, in fact be real. Buckout Road is The Omen meets Urban Legend.

Here’s the synopsis for the film:

There is a small rural stretch of road that connects Westchester to White Plains New York called Buckout Road. It home to over a dozen terrifying urban legends?and is considered, by some to be the most haunted road in America.

AARON POWELL (Evan Ross) is a smart, resilient and skeptical soldier in training from Navel Post-Graduate School who returns home after a two-year absence to the only family hes ever really known; his emotionally distant, brilliant psychiatrist grandfather, DR. LAWERENCE POWELL (Danny Glover).

The two men have seemingly little in common and while Dr. Powell does have much love for his orphaned grandson he is preoccupied by the mysterious events that led to the recent suicide of one of his patients; a beloved college professor STEPHANIE HANCOCK (Mayko Nguyen).

After reviewing psychiatric session tapes at the police station with DETECTIVE ROY HARRIS (Henry Czerny), Dr. Powell is inclined to surmise that the cause of Stephanies nightmares, sleepwalking and eventual suicide was due to her suffering from an undiagnosed case of schizophrenia.

Just to be thorough, Dr. Powell requests to review both Stephanies case file and her taped sessions one last time. Detective Harris gives Powell the file and then asks a favor; to have a session with his distraught daughter, CLEO HARRIS (Dominique Provost-Chalkey) who is taking the death of her beloved humanities professor very hard.

Powell agrees to see Cleo at the house where the emotional chasm between he and Aaron continues to widen.

After his session with Cleo, Dr. Powell discovers haunting similarities shared by both Cleo and Stephanie. Both women suffered bouts of sleepwalking and both women had vivid nightmares involving the infamous urban legends of Buckout Road. But there was something else Both women were being haunted by an evil presence.

Aaron catches Cleo with ERIK and DEREK GANZER (Kyle Mac and Jim Watson) breaking into his house, looking for something.

Cleo tells Aaron they did an assignment for their humanities class on the Creation and Destruction of Modern Myth and they chose to not only investigate but to also DEBUNK the Buckout Road urban legends and now feel they have been cursed and that they will end up killing themselves, just like Professor Hancock.

Aaron dismisses their fear as paranoia and kicks them out of his house. And then He too begins to have terrifying dreams about Buckout Road.

Aaron, despite his own pragmatic skepticism, realizes that there really is something that haunts the famed Buckout Road and unless he, Cleo and the Ganzer Twins solve the mystery of how to stop the evil, its just a matter of time before Buckout Road claims all of their souls as well.

According to IMDb, the movie was filmed in Canada, has won a few awards in the festival circuit, and is or was released in Canada 2017.