Here’s what’s happening Today in the 914, according to Westchester Woman:?Everything You Need to Know About Voting in NY; Groundbreaking CEO E. Lee Hennessee-Gradante Passes Away; MORE.

1.) Tomorrow is the big day folks. And although you’ll have little control over which of the four candidates will be elected as President because of the Electoral College, we have control over who we elect to make our local laws.

Here in Southern New York, ?we have great local media that gives us lots of information to get us ready for Election Day.

Here’s everything you need to know when you head to the polls about where you can vote, what the ballot looks like and what not to wear (also remember no voting selfies!):

Election Day 2016 FAQ: Where and how to vote

Election Day is finally here. After more than 18 months of campaigning, a pair of hard-fought primary elections, debates, inundated social media and non-stop news coverage, the 2016 election cycle will at last come to a close on Tuesday.

Lohud even gives us an overview of the candidates who are running in Westchester:

Here is a look at the candidates and propositions that will be on Putnam County ballots on Election Day, Nov. 8. Putnam voters will cast ballots on contested races for president, vice president, U.S. Senate, Congress, state Senate, Assembly, Putnam County judge and Putnam Legislator in District 6 (Southeast), as well as Philipstown justice and proposed library budgets in Patterson and Putnam Valley.

Here’s where you can find voting info for New York City:

Everything New Yorkers need to vote.

Always make sure to check your local media. If you’re not within those County or want some extra info, check out Vote411.org, which will tell you where you can vote and who your candidates are. Sometimes they even have a little info on your candidate’s background.

Ballotpedia offers similar info, but they also tell you how your candidate has voted in the past:

2.) New York hedge fund pioneer and philanthropist?E. Lee Hennessee-Gradante passed away in her West Palm Beach condo at the age of 64, according to the Palm Beach Post.

Hennessee-Gradante is credited with breaking ground in Wall Street’s male dominated world. She was the co-founder of the 100 Women in Hedge Funds and was a member of the Women’s CEO Summit where she advocated for women CEOs. She also was a fundraiser for charities for children and young people and encouraged women in business to be successful without compromising their ethics.

Hennessee-Gradante was featured for her expertise on Bloomberg, CNN and CNBC and was selected as one of New York’s 50 most powerful women in 2007.

Hedge fund pioneer and philanthropist E. Lee Hennessee-Gradante, 64, was found dead at her Trump Plaza condo in West Palm Beach from an apparent stroke, a family spokesman said Sunday. She was found in her $1.6 million condo Saturday, but her identity was not immediately released by police.

3.) Twos Company, a gift and home accessory company in Elmsford, is hosting their annual charity sale to raise funds for The Innocent Project and Volunteer New York!

The details about the drive are below: 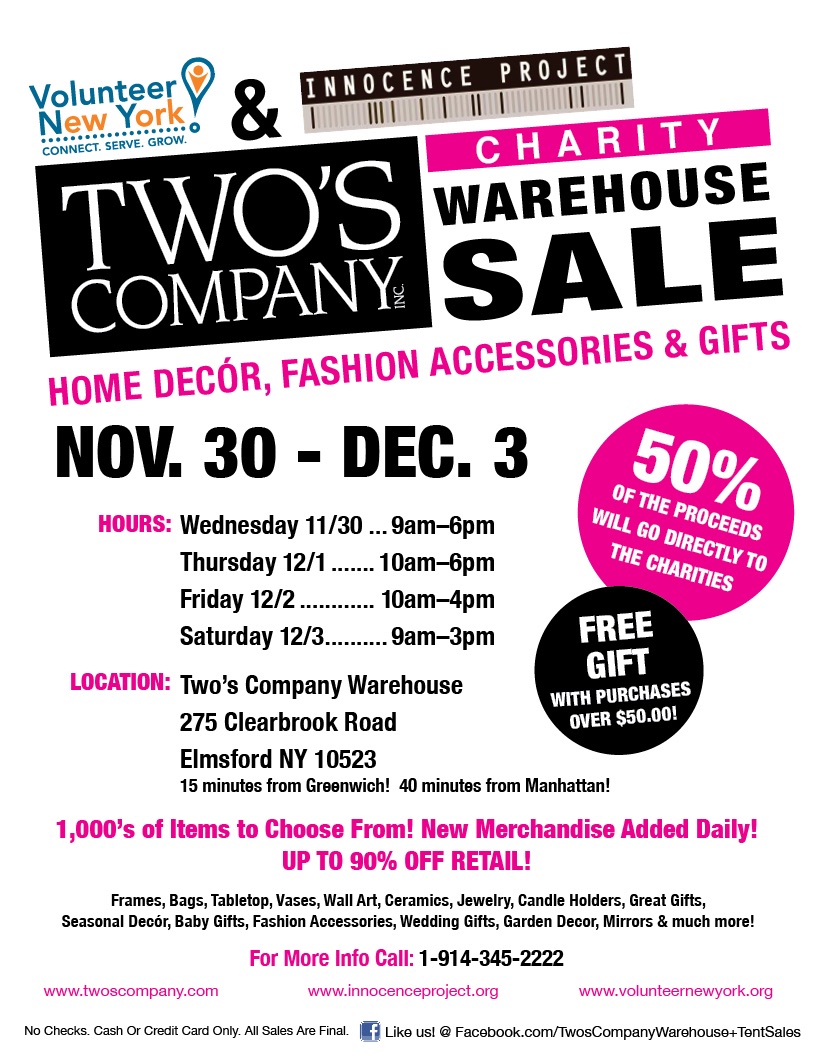 One hundred sixty-eight years ago, a hastily assembled group of suffragists, abolitionists, Quakers, and Methodists gathered in a sleepy mill town in Upstate New York to argue that women should have the right to vote. – Debra Bruno, Philadelphia Washington Post

Mary Latham is posting stories on her website, www.moregood.today, named for the idea that “there is more good than bad out there.” Rhode Island is the second state in a New York woman’s journey to collect acts of kindness, whether random or otherwise, from people in all 50 states.

Girls spend 40 percent more time than boys doing household chores, according to a new UNICEF report. Across the world, girls between the ages of 5 and 14 spend 160 million more hours cooking, cleaning the house, taking care of family members, and collecting water and firewood.