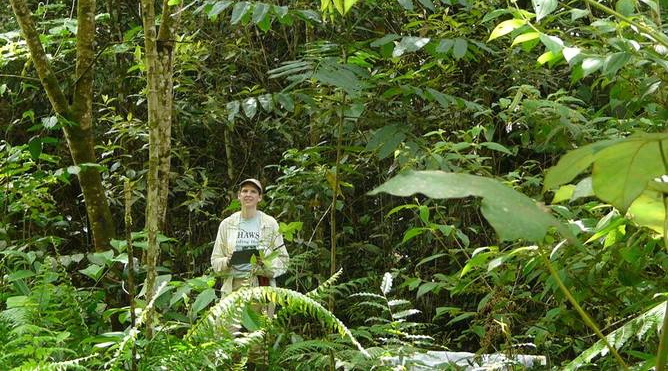 Her adventurous studies have recently lead Letcher and her international colleagues to a fascinating discovery about the regenerative capabilities of rainforests and their ability to rid the atmosphere of climate-changing carbons.

Letcher, 37, says her fascination with plants began as a child when she would sit in her mother’s garden wondering how they managed to grow. She dreamed of visiting the rainforest after reading about it and finally got her opportunity to do so in Ecuador.

“I was just blown away by the diversity of plants I saw, and just the beauty of it all,” recalls Letcher, who lives in Pleasantville. “I thought, ‘I want to understand this. This is what I want to do with my life.'”

She got firsthand experience of what perils her studies would entail during her junior year in college while studying the ecology of the tropical rainforest.

“I went off the trail for the first time and I was petrified,” said Letcher. “I saw a snake go by my boot and I stepped backwards into a nest of army ants. I just said, ‘I will not be intimidated by this.’ And I kept going back and I’ve been going back ever since to do research there.”

The data for Letcher’s most recent study took more than three years to compile and countless hours. The paper, which was published this week in Nature, found that forests in Central and South America can quickly rebound without human intervention on land that has been cleared for cattle grazing or growing crops.

This finding has important implications for climate change because these so-called secondary forests soak up large amounts of carbon from the atmosphere, even without costly reforestation efforts. These regenerating forests are also crucial for protecting biodiversity, which provides numerous ecological and social benefits.

Letcher, who has taught at SUNY Purchase for the last five years, worked with rainforest ecologists from around the world to analyze more than 1,500 forest plots in 45 sites across Latin America for their paper. Letcher’s work comes from Costa Rica, where she has conducted fieldwork since 2003.

“Where I grew up in Maine, a 15-year-old forest is basically a thicket of trees as big around as my arm,” says Letcher. “In some of these tropical forests after 15 years, there are trees too big for me to hug.”

The trees involved in the study recovered 122 tons of biomass per hectare (2.5 acres) over a 20-year period. This corresponds to an uptake of 3.05 tons of carbon per hectare per year. It takes about 1 metric ton of carbon emissions to fulfill the energy needs of the average U.S. household.

“I just think about being there and seeing how rapidly this forest springs back,” Letcher told Westchester Woman. “There’s just something so magical about that.”

Letcher and her colleagues’ work demonstrates how tropical forests can regenerate much more rapidly than previously thought. The study can help guide policy to minimize the loss of forests where rainforest resilience is low and promote regeneration where it is high.

“The natural world is incredibly resilient,” says Letcher. “If was can harness the power of that resilience, we can mitigate some of the harm that human activity imposes on the world and its climate system.”