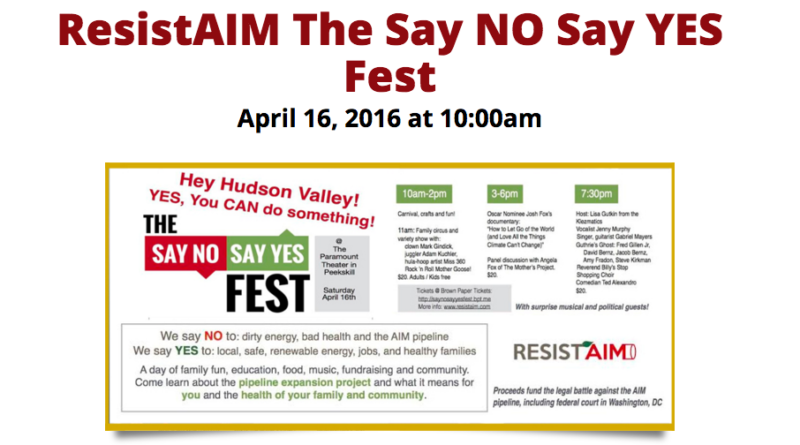 New York women are bringing their organizations together to make sure their hometowns aren’t destroyed by what they say is dangerous infrastructure that could poison the environment and will prolong the country’s dependence on fossil fuels.

Resist AIM’s?Say NO YES Fest, a day of “fun, activation, and resistance,” will take place starting at 10 a.m. on April 16 at the Paramount Hudson Valley in Peekskill. The one-day festival will raise awareness and funds for the?legal defense in fighting?Spectra Energy’s Algonquin Pipeline expansion.

“There is something for everyone there, and it’ll be a great night of entertainment,” said event organizer Tina Volz-Bongar of Resist?AIM. “I just want?people come out to have fun and be educated.”

The event is made possible by Resist AIM and the other women activists involved in environmental?organizations that protest the pipeline, including:?Susan VanDolsen of Stop the Algonquin Pipeline Expansion (S.A.P.E.); Nancy Vann and Courtney Williams of Safe Energy Rights Group (S.E.N.rG.); and Ellen Weininger of the Grass Roots Environmental Education.?(Click on each organization’s link above to learn more about their efforts to protest the pipeline and how you can help)

Resist AIM’s event is meant to be a where attendees will say, “NO to Spectra’s AIM Pipeline and YES to clean, safe, renewable energy and healthy communities.” There?will be food,?comedy, music, movies, children’s events, hula hoopers and more, and maybe even a special guest.

Volz-Bongar said Bernie Sanders’ camp had reached out to her and was planning to attend the festival, however his appearance was complicated by Pope Francis’ invitation to the Vatican.

Volz-Bongar said she is hoping for a miracle and that Sanders, who recently called for an end to fracking in states like New York, will show. Either way, she says the event is not to be missed and will include delicious food; comedy acts; family fun; education and activist musical acts.

Here's the trailer for his new documentary:

For more info on the performers and attractions check out Resist AIM Pipeline's Facebook page at?facebook.com/resistaim.?Get tickets for the event at?www.brownpapertickets.com/event/2529126.

Volz-Bongar, a Peekskill resident, said she was driven to create a large scale event days before a major?presidential primary after activists, local residents and local and state politicians have failed to persuade the Federal Energy Regulatory Commission (FERC) to stop the project.

The pipeline is owned by Texas-based company Spectra Energy who wants to extend their it?through New York, Massachusetts, Connecticut and New Jersey to frack more natural gas north from Pennsylvania's Marcellus Shale. Environmentalists and citizens across the state's are trying to stop the expansion citing the negative effects of fracking that can poison local water supplies; the emission of harmful chemicals into the air; and the potential for gas leaks or explosions among other concerns.

"I just can't believe these people would put this dangerous thing next to a failing nuclear power plant, where there are other place it can go," said Volz-Bongar. " It's not a matter of NIMBY [not in my backyard]. I don't want it. I don't think it should be there. I wanted to be active and I didn't want to just talk about this anymore."

"There's a lot of talk about climate change and?there is a lot of talk?about natural gas infrastructure being a bridge fuel, but it's actually worse," said Volz-Bongar.

"We need to stop approving more gas infrastructure projects, which are chaining us to fracked gas and climate changing fossil fuels for many decades to come destroying our health, land, water and food supplies while accelerating our climate crisis. We need a rapid transition to 100% renewable energy and an intensification of energy efficiency and conservation measures now."