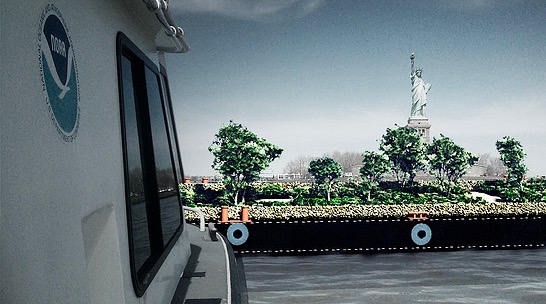 (Photo above ad is?rendering of Swale by T. Craig Sinclair)

Another one of our?dreams just came true! Swale, a floating free food forest art project, is coming to Westchester.

And we can hardly contain ourselves…

Westchester Woman Editor-in-Chief was so inspired by the project’s attempt to transform healthy food into a free public service that she offered to help out with their Instagram page and promote the project. She just found out that in addition to stopping at various docks on the mighty Hudson River in NYC, Swale will also be docking at Neptune Park in New Rochelle.

Here’s the latest story on Swale on TakePart.com:

Since growing food on public land is against the law in New York City, Swale put its project in the water and?on a barge. The?120-by-35-foot barge will grow fruits, vegetable and plants, like strawberries asparagus and Swiss chard, and is completely free to anyone who climbs aboard.?We are SO ready to do some serious frolicking in that food forest!!! SO READY!

Swale is the invention of the beautiful brain of artist Mary Mattingly. She thinks of Swale as both a sculpture and a tool. Here’s Mary’s video on how Swale came about and how it will work:

We are working toward more edible public places in the city, with the bigger goal of revaluing healthy food as not only an expensive commodity but also a basic human right, Mary Mattingly, the founder of Swale, told?TakePart.

The floating utopia?will launch at the end of June and will also stop at Concrete Plant Park in the Bronx, Yankee Pier on Governors Island and Brooklyn Bridge Park Pier 6.

First and foremost, [Swale is for] people who need it, and who have less access to fresh food, Mattingly told TakePart. But it is also geared toward people who want to work toward change and will be inspired by it.

Swale will also serve as an artistic space.?Biome Arts, a collective of artists and ecologists, will host Eco_Hack 2016?aboard Swale in the summer, with an?installation, ?performances, and free skill-sharing workshops. Here’s video from Biome Arts’ website:

[Art] can provide a space to interrogate predatory economics and the violence inherent in types of consumption while co-creating an alternative, Mattingly said.?I believe it is necessary to create spaces that are more interdependent throughout the city, spaces that can better provide for all of the needs people have in a city.?I hope Swale allows us to rethink ideals around commodities, value, and the commons.

If you’d like to learn more or contribute?some soil or a fruit tree to Swale visit swaleny.org. We’ll see you on Swale on this summer!