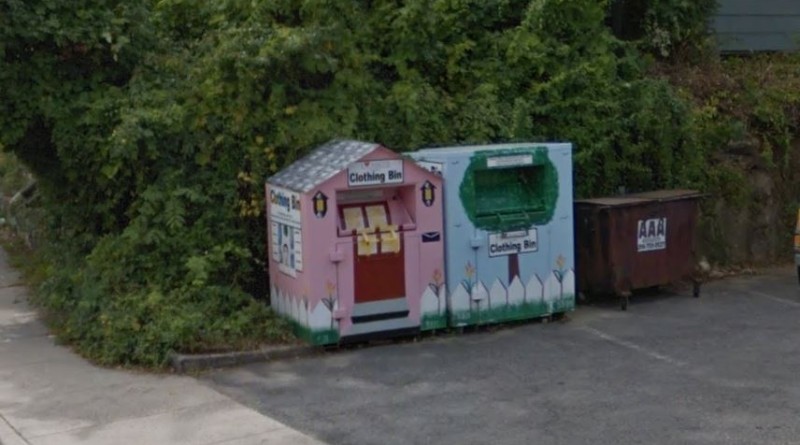 Ever drop-off your old clothes in one of these pink or blue bins clothing donation bins? Yeah, us too. Weve, apparently, been scammed.

What we thought would be a nice donation to help clothe those in need was actually just a front to line the pockets of ?a for-profit?organization to the tune of $10 million, according to the state attorney general.

The New York Daily News reports that that bins advertised for Big Brothers and Big Sisters of Rockland County and the Queens-based charity called I Love Our Youth Inc., were actually being sold to customers in Mexico, Jordan and other countries.

Duping members of the public into thinking that they are making a charitable donation, when in fact they are enriching a for-profit corporation, is both deceptive and illegal, said New York Attorney General Eric Schneiderman.

When a for-profit company masquerades as a charity, my office will hold it and its owners accountable.

Heres what happened, according to LoHud.com: Yonkers businessman Carl Vella and owner of Thrift Land USA placed his bins throughout Westchester and Connecticut, making it seem like the donations would go to Big Brothers and Sisters of Rockland and I Love Our Youth. The two organizations?earned?more than $1,000 per month for the use of their name and logo, though they never received or distributed?clothing donated to the bins

There were?1,356 bins located in shopping centers and gas stations in Westchester, according to LoHud.com you know youve seen those things!

As a result of the investigation, Vella is paying $50,000 in fines and $650,000 in donations to the New York Community Trust and Westchester Community Foundations. From now on, they have to make it clear that they are for-profit and donations in their bins dont go directly to charity.

Big Brothers Big Sisters of Rockland will have to oversee and manage all donations that bear their name and I Love Our Youth, which had already lost its tax exempt status, will be dissolved.

Click here to get all the details on this story.