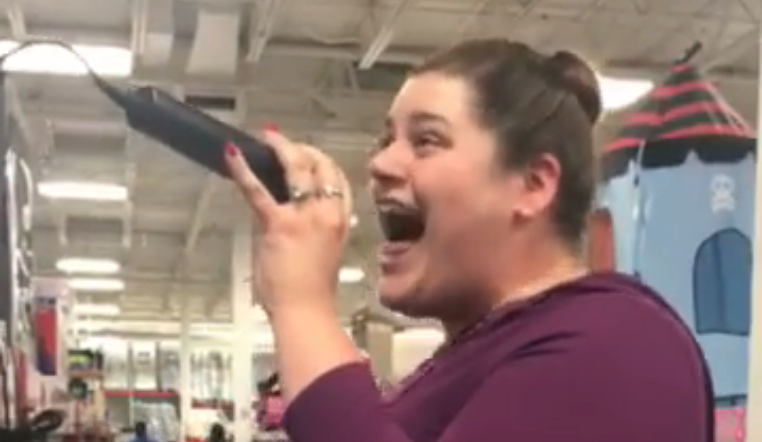 Even the simple act of shopping at Sam’s Club can be the most fun ever when you’re with your best friend.?Just ask Christina Kokonis-Viggers and her friend Amanda Lasher who recently turned their shopping trip into karaoke night.

The two women were at a Sam’s Club in Ulster when they spotted a karaoke machine.

They found that the machine had a Bluetooth feature that allowed them to pair their cellphone with?the?karaoke machine.

At that point, it was time to sing!

The two women gave no craps whatsoever that they were surrounded by a bunch of confused shoppers. For them it was showtime. That’s when Christina began to belt out “Maybe This Time” from the musical “Cabaret.”

“There are people that were stopping by and they just stood there the whole time,”Christina told ABC 7.

After the initial?stares, shoppers started to admire Christina’s unabashed performance.

“Afterwards, she got like this great applause,” Amanda said. “That was amazing.”

Christina was just doing it for fun but her bestie had something else in mind… internet superstardom.

“Amanda posted the video,” Christina recalls. “She said, ‘I’m going to put it on Facebook. This is going to blow up.’ And I said no.”

Turns out Amanda was super on point. Christina’s video now has more than 11 million views on Facebook and is getting praise from people all over the world.

Many applauded Christina for her beautiful voice. Not only is she bringing the internet some joy but she’s also inspiring the love of singing in others.

Every Sam’s Club should have karaoke station, we’d totally shop there more!

Free samples and karaoke… does it get better than that?

Since becoming the latest internet sensation Christina, who works with the non-profit theater Upstate Productions and is originally from Staten Island (shout out to Shaolin), has gotten calls from talent recruiters as well as the people from America’s Got Talent.

You can check out her new Facebook page “Diva in the Making” here and watch her Sam’s Club performance in the video below.

This epicness just went down in Sam’s Club. Sam’s Club you are welcome!#samsclub#putmeonsteve