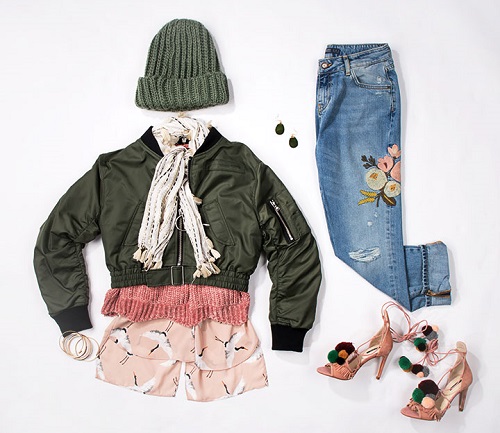 1.) With temperatures dropping to 45 degrees, up to 80, back to 45 and then to 65…?it’s hard to tell what the heck we should leave the house in this fall. One way to make sure you’ll be warm or cool enough is to layer. Add more to get warm take some off to get cool.

Cross County Shopping Center put together some great tips on how to get the perfect fall layered look. Check them out below:

4. Bomber jackets – which are replacing the military jackets this season – can act as a wind breaker for any outdoor activity and is still lightweight enough to keep your look breezy. Bomber jackets are available at stores such as GUESS, H&M, AX Armani Exchange, Garage, American Eagle Outfitters and more.

2.) Ami McKay’s new book?The Witches of New York?is a fictional tale of the dangers of being a witch and a woman in Manhattan in 1880, 200 years after the Salem witch trials.

McKay is the nine times great niece of Mary Ayer Parker, a 55-year-old widow who was hung for witchcraft in the 17th Century in Salem. Outrage over the historical treatment of women is infused in her book which she describes as, part Victorian fairy tale, part penny dreadful, part feminist manifesto.

Read more about McKay’s book below:

When Ami McKay was writing her new novel, The Witches of New York, she discovered an unsettling fact. Her nine times great aunt Mary Ayer Parker, a 55-year-old widow, was hung for witchcraft in the 17th Century. The distant relative was imprisoned, tried and convicted, and on September 22, 1692 she went to the gallows.

3.) More than 200 girls recently met at?Ardsley High School for the Girl Scouts’ second WizGirls: Building the Future, a?STEM (science, technology, engineering and math) conference where girls in grades four through seven got to engage in a series of hands-on workshops lead by STEM professionals to help inspire them to STEM careers. Here’s what the event looked like:

You can learn more about Westchester’s WizGirls?in lohud below:

GREENBURGH – When Sheila Narayanan wanted to sign her daughter up for a computer coding class, the 12-year-old told her mother she wasn’t interested because she thought she was “too old” to learn. Narayanan, chief digital experience executive at Girl Scouts of the USA, is aiming to change the narrative that women don’t belong in the fields of science, technology, engineering and math.

A surveillance video caught a woman stealing a bowl of Halloween candy The woman from Westchester, New York, has no children with her at time She pours an entire bowl of candy into her bag before running away A woman in New York got a little too grab-happy when it came to Halloween candy and stole an entire bowl.

DJ-Con is a pop-up experience that will gather more than 50 DJs and freestyle MCs to celebrate hip hop’s musical legacy and Mount Vernon’s role in it. MOUNT VERNON – Rappers and turntablism will be the focus of a Mount Vernon event Saturday afternoon.

From leaves and pumpkins to pumps and plaid