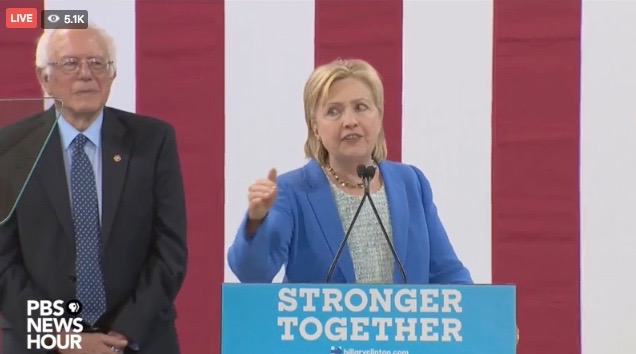 Sanders, who proved that political campaigns don’t have to depend on corporate or Super PAC?funding , spoke of unity and gave an inspiring and truthful account of the state of the country and what it needs to progress.

Sanders called Clinton a?”fierce advocate for the rights of our children,” and “one of the most intelligent people that we’ve ever met.”

“Hillary Clinton will make an outstanding president and I am proud to stand with her today in New Hampshire,” said Sanders.

Clinton said she was honored to fight alongside Sanders. Clinton called for our country to come together to and overcome systemic racism and rebuild bonds of trust between the community, police departments and each other

“We really have to search our hearts and minds to make sure we don’t have those implicit biases,” said Clinton.

Clinton said that creating national guidelines on the use of force for police officers and providing training on implicit bias?will create a world with “respect for the law, and where everyone is respected by the law.”