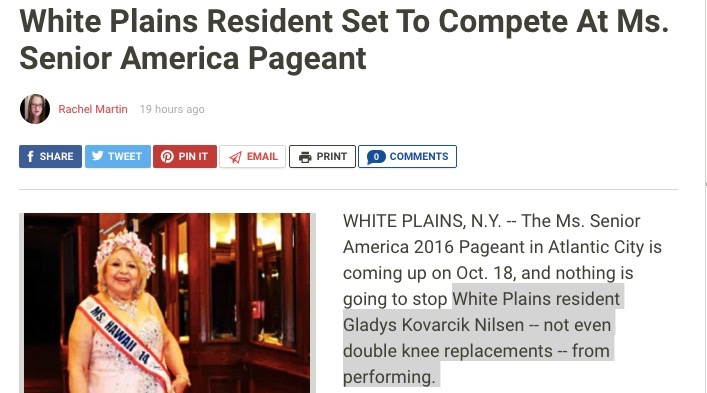 Here’s what’s happening Today in the 914, according to Westchester Woman:?White Plains Woman to Compete at Ms. Senior America Pageant; Where to See Fall Foliage; MORE.

1.) Nothing can stand in the way of?Gladys Kovarcik Nilsen pursuit of the Ms. Senior America crown. Not even a knee replacement!

The 77-year-old White Plains residents is an actress, singer and served as Ms. Hawaii Senior America and will compete for the title of?Ms. Senior America in ?Atlantic City on Oct. 18,

Read more about Nilsen below in the White Plains Daily Voice:

WHITE PLAINS, N.Y. — The Ms. Senior America 2016 Pageant in Atlantic City is coming up on Oct. 18, and nothing is going to stop White Plains resident Gladys Kovarcik Nilsen — not even double knee replacements — from performing.

2.) Though it’s not quite?fall yet and there is?still summer fun to be had (especially with the incoming beautiful weather this weekend), you can start planning your fall foliage trips with this great list from Westchester Magazine:

Purchase College President Thanks Campus Community For Uniting After Fire

This story has been updated. PURCHASE, N.Y. — Purchase College’s president thanked area firefighters, State University of New York staff, university police and the campus community for uniting in the aftermath of Sunday’s dormitory fire which displaced 25 students. The four-alarm fire, which remains under investigation but is not considered suspicious, broke out about 10 p.m.