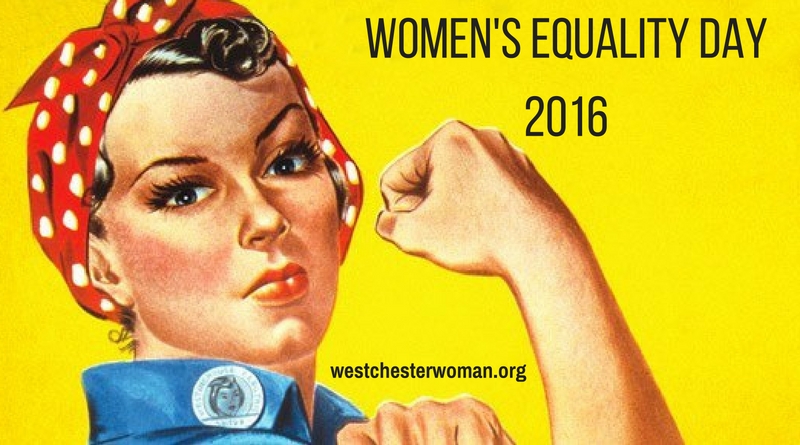 WOMEN’S EQUALITY DAY, 2016 – – – – – – – BY THE PRESIDENT OF THE UNITED STATES OF AMERICA A PROCLAMATION Nearly one century ago, with boundless courage and relentless commitment, dedicated women who had marched, advocated, and organized for the right to cast a vote finally saw their efforts rewarded on August 26, 1920, when the 19th Amendment was certified and the right to vote was secured.

Womens Equality Day was started by Rep. Bella Abzug in 1971 to recognize the passage of the 19th Amendment?on Aug. 18, 1920, which gave women voting rights in the U.S.

Not only did Westchester women work to make sure they?could vote in their own county, but their efforts also influenced the fight for a woman’s right to vote throughout the U.S. Here’s a tribute and some facts about Westchester’s suffragists.

Westchester Women and Their Fight to Win the Vote

We’d also like to acknowledge organizations like the Westchester Women’s Agenda, the Westchester chapter of the National Organization for Women (NOW) and the White Plains and Central Westchester YWCA who continue to champion for the equal rights and treatment of women today.

Ossining-Croton-On-Hudson, NY – The League of Women Voters of the Rivertowns offers important information for Hudson Valley residents before the elections.

2.) The U.S. Coast Guard wants to create?10 commercial shipping anchorages on the Hudson River from Yonkers to Kingston in Ulster County, and some Westchester officials are NOT happy about it.

Communities from ?Briarcliff Manor, Buchanan, Dobbs Ferry, Hastings-on-Hudson, Irvington, Ossining; the towns of Cortlandt and Ossining and the cities of Peekskill and Yonkers have come together to formHudson River Waterfront Alliance?to reject the Coast Guard’s proposal.

While many riverfront communities in Westchester are working to revitalize their waterfronts for recreation, local mayors are saying the anchorages will spoil their efforts.

It would be the height of folly to create what are essentially industrial parking lots that ruin views, endanger recreational boating and place the entire river shed at risk from spill and accidents. This proposal should not be implemented,?said Hastings-on-Hudson Mayor Peter Swiderski, according to Patch.

A 12-year-old girl from the North County reeled in this record-sized freshwater drum in June 2016 in Lake Champlain (Photo: New York State Department of Environmental Conservation) ALBANY — A teenager fishing in Lake Champlain snagged a record-breaking fish this spring.

Congresswoman Nita Lowey (D-Westchester/Rockland), the senior Democrat on the House Appropriations Committee, sent a letter to Mylan Chief Executive Officer Heather Bresch, expressing concern over the skyrocketing cost of EpiPens. “According to various news accounts, the price of EpiPen has increased 400 percent since 2007.

Columnist David McKay Wilson explores the outcry over Scarsdale’s 2016 revaluation One resident demanded that the Scarsdale assessor resign, comparing her to Machiavelli. Another called the revaluation consultant “an idiot.” A third said the consultant had so botched Scarsdale’s second revaluation in three years that he was disgusted with the village government.

Photo: LIRTLON/FOTOLIA Westchester County residents’ fears that our area is not properly prepared to defend against disease-carrying mosquitos may have been validated this week. According to News 12, a total of 29 confirmed cases of Zika infections have been diagnosed across both Rockland (10 cases) and Westchester (19 cases) counties.