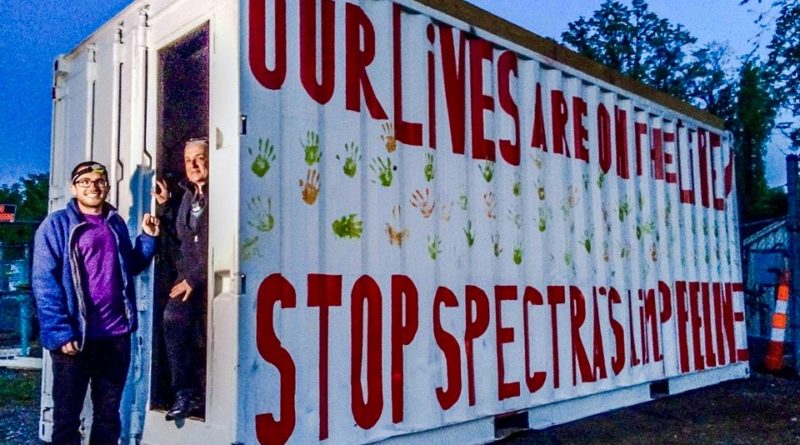 The following is a press release from Resist AIM Pipeline:

They plan to stay inside the container blockade for as long as possible.

The AIM Pipeline is a 42-inch, high pressure, fracked gas pipeline, which if completed will run through residential communities and within 105 feet of critical Indian Point Nuclear Power Plant safety facilities.

The fully self-contained home is a strong symbol of both resilience and resistance.

It is intended to halt construction of the dangerous AIM Pipeline and to represent the safe alternative living situation we need to move towards to fight climate change and to halt our dependence on fossil fuel, which drives the buildout of dangerous infrastructure like the AIM Pipeline.

The container home was built using reclaimed and recycled materials, is powered by both photovoltaic solar panels and a bicycle generator, has a green roof growing succulents and herbs, has a solar-heated shower and a compost toilet, and comfortable living space and beds for two occupants.

All of these measures are important, but without stopping fossil fuel infrastructure, we are still on a path to disaster – which is why this project is also designed to physically stop construction on the AIM Pipeline.

The sustainable home has two occupants, both of whom walked across the entire country to raise awareness about climate change as part of the Great March for Climate:

I was inspired by the fierce, loving determination in the voices of 13 Resist AIM members who disrupted a FERC public meeting to call out the commissioners for their complicity in the destruction Spectra represents, said Lee Stewart. It is an honor to take up temporary residence in New York on the route of the AIM Pipeline.

Spectra has placed all of us on a destructive path and in harms way. Today this simple small house, built from reused and repurposed materials and powered by renewable energy, stands on the AIM Pipeline path to halt construction, said Jane Kendall.

This action comes after years of residents and grassroots groups actively engaging in the regulatory process, only to be ignored by FERC.

The City of Boston and several grassroots groups have filed a lawsuit in Federal Court challenging FERC approval of the project. In February, Governor Andrew Cuomo wrote to FERC asking for an immediate halt to construction while New York State conducts an independent risk assessment of siting the massive, high-pressure pipeline next to Indian Point Nuclear Power Plant. FERC denied the Governors request, and claimed that a risk assessment by the Nuclear Regulatory Commission (NRC) showed that the plant was safe.

Just five days ago, on May 20th, Senators Charles Schumer and Kirsten Gillibrand called for an immediate halt to construction.

Spectras Director of Stakeholder Outreach, Marylee Hanley, responded that Algonquin Gas Transmission resumed construction on the Algonquin Incremental Market (AIM) project in April and will continue with its construction.

Now Spectra is rapidly proceeding with construction in our area despite opposition from thousands of New Yorkers and elected representatives, said Kendall. We are at a critical stage in this struggle, with project completion scheduled for November. Each day more trees are cut, more blasting takes place, and more pipeline is laid. It is necessary for us to stop this project now.

There is no more time to wait. The Federal Energy Regulatory Commission has shown that it will not protect us from the fossil fuel industry that is destroying our climate. Instead, everyday people are stepping up and modeling the future we want to see while taking a stand against the dangerous pipeline that threatens us and our friends and neighbors.

I am also taking this step because of the amazing connection I feel to the amazing people all over the state who are not only standing up to AIM, Spectra, and FERC, but who are also finding ways to build community during a time when the power that be are bent on keeping us isolated and narrowly focused. Said Stewart.

Encourage your friends to sign the Pledge to Resist the AIM Pipeline:
tinyurl.com/ResistAIM