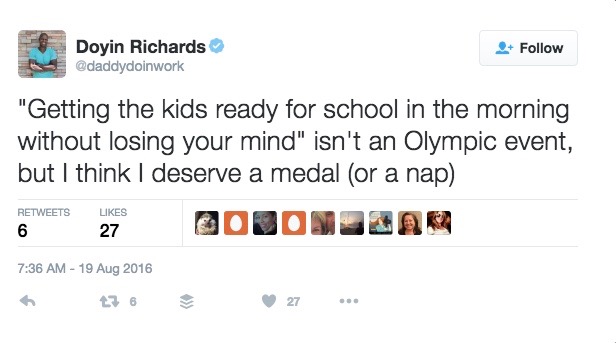 1.) Sometimes single dads can have a little trouble making their house feel like home. That’s where SimplyHome2 comes in, a company started by Westchester women?Patty Frischman and Tanhya Schimel, who live in?Bedford and Armonk.

Their business SimplyHome2 helps fathers who are divorced or widowed to create a cozy home for them and their children. Read more about their endeavor in Westchester Magazine:

SimplyHome2 Co-Owners Patty Frischman (l) and Tanhya Schimel (r). Photos courtesy of SimplyHome2 SimplyHome2 is a business catering to dads who are either divorced or widowed who want to create a home that is comfortable for them and their children.

2.) Though kids in Westchester haven’t gone back to school yet, they will soon and parents are beginning to brace themselves for the start of the school year.

“Getting the kids ready for school in the morning without losing your mind” isn’t an Olympic event, but I think I deserve a medal (or a nap)

The Huffington Post put together a hilarious compilation of the funniest back-to-school tweets for every emotion a parent experiences when sending their kids back to school. Check it out below:

Having the kids go back to school is a mixed bag of emotions for parents there’s the stress of back-to-school shopping, the chaos of getting the kids ready and out the door in the morning and the excitement at finally having a moment of peace since school let out for summer.

Grace VanderWaal, the 12-year-old from Suffern who became a global sensation after strumming one of her ukuleles on “America’s Got Talent” in June, will perform live tonight at 8 p.m. on NBC. “There’s a lot of nervous feelings but I just tell myself it’s just excitement,” she said last week about her upcoming performance.

One of the top 10 things homeowners want most? A fancy new bedroom with its own master suite and a walk-in closet. That’s according to Jonathan and Drew Scott, HGTV’s Property Brothers, who filmed the two most recent seasons of their show in Westchester and Rockland. And they should know.

Buy Photo Medical marijuana that will be dispensed by Etain LLC will be come in various oil based forms, including tincture, oral spray, capsules, and vapor. The company will dispense the medical marijuana at its location on Main Street in Yonkers.