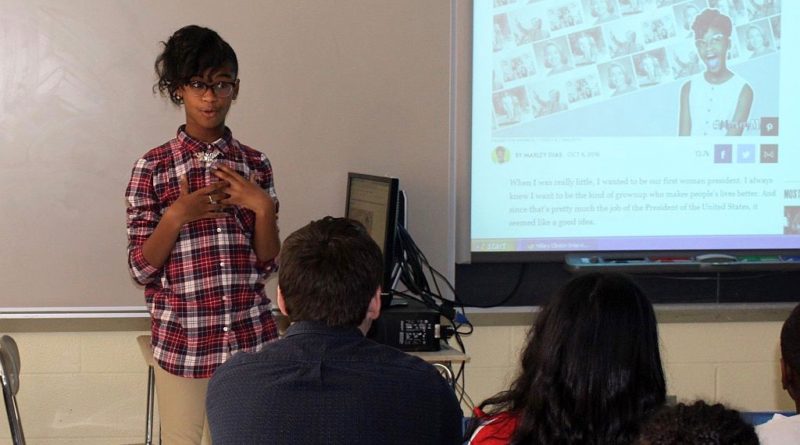 1.)?Marley Dias was bored with reading books that didn’t have girls like her as the main character, so the 11-year-old?decided to set out on a mission to find books she and other black girls could relate to.

Marley learned that less than 10 percent of children’s books have a black person as the main character, according to the Cooperative Childrens Book Center at the University of Wisconsin. So she decided to collect and distribute?1000 books to for the elementary school in her West Orange New Jersey school district, and started the #1000BlackGirlBooks movement.

Marley Dias, the 11-year old who launched #1000BlackGirlBooks, was the special guest of the Superintendent’s Literacy Club’s first luncheon. Marley, who is a 7 th grader at Roosevelt Middle School in West Orange, NJ and, most recently, Editor-in-Residence at Elle Magazine, noticed that most books that she read did not have main characters that reflected her life experiences.

She ended up collecting 8,000 books and also donated them to Jamaica, Haiti and other parts of the U.S. Marley, a seventh grader at Roosevelt Middle School who was named as an Editor-in-Residence at Elle Magazine, recently came to talk to 45 students at Poughkeepsie Middle School to discuss reading, equity, inclusion, and diversity.

Though there was some controversy over the $6,500 keynote speaker fee she was paid, the school district said the use of Title I funds, which are used to improve education for disadvantaged students, in line with other speaking fees the district has spent and was worth it and in an effort to inspire their student with someone their age who is leading a nationwide literacy initiative.

“About 90 percent of our students are below reading level,” Superintendent Nicole Williams told Poughkeepsie Journal. “We have to motivate our scholars to read. The girl was professional and presented a focused approach to motivate teachers and students with a message that was just as powerful as any adult’s.”

2.) New Yorker?Colleen Dyckman recently sifted through six tons of garbage for four hours at the town dump in Babylon and she did it all for love.

She accidentally swept her engagement ring and wedding band into the garbage after taking them off to cook Sunday dinner. Once she realized it she was able to follow the garbage truck to the dump where she begged sanitation workers to let her sift through the refuse on their truck.

(KUTV) Most people would give up if the dump truck took their garbage away to the landfill, but not one New York woman – she was determined to find her wedding rings.It took four hours of searching through six tons of discarded trash, but Colleen Dyckman w

The rings were worth about $5,000, but to Dyckman they were priceless since they symbolize 20 years of love between her and her husband. The workers were moved by her plea and?about eight of them joined in on the search.

She was visibly upset, she was ripping through garbage, disgusting stuff, Jeremy Aretakis, of the Town of Babylon Recycling Center told CBS New York.?She didnt stop, so none of us stopped.”

Dyckman, however, said she was going to stop but didn’t because the crew kept on going. One sanitation employee used positive thinking and visualization to find the ring.

I was saying to myself, I hope I find this ring, so Im happy I found it, I really am, said Kim Weathers.

She doubled checked a bag fully of slimy food and found it. The reunion of the ring with its owner was said to be something out of movie. Dyckman was so grateful she brought everyone boxes of pizza brownies. Another New York woman lost her ring the same exact way as Dyckman in April and was able to find it after searching through seven tons of garbage in 45 minutes with the help of four others.

That’s the power of love people!

3.) Jam of the Day (Have yo’self a dance party gurl!) – Mariah Carey’s Fantasy, filmed in Westchester at Rye Playland in New York

Michelin just added 13 newcomers to its guide of the best restaurants in New York City – none of which have female chefs at the helm.

In 1999, photographer Annie Leibovitz released her photography series Women. Upon the project’s release, Leibovitz’s then-collaborator Susan Sontag called it a “work in progress.” Now, 15 years later, Leibovitz and Gloria Steinem are continuing that work in the roving UBS-commissioned exhibit ” WOMEN: New Portraits,” which opens in New York this Friday.

SCARSDALE, N.Y. — Assemblywoman Amy Paulin, D-88, is co-hosting a forum on the topic of sexual assault and its destructive aftermath in Scarsdale. Paulin, along with the Scarsdale High School PTA, Scarsdale Edgemont Family Counseling Services and the Scarsdale Coalition on Family Violence, will sponsor a free screening and discussion of the documentary “Audrie & Daisy” on Wednesday, Nov.