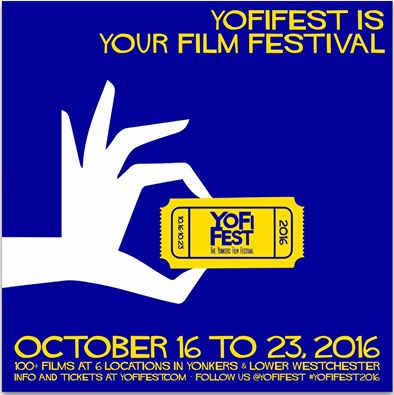 1.) ?More than 100 films will be viewed over eight days during the Yonkers Film Festival from Oct. 16-23. Get the details from lohud below:

What began three years ago as a handful of independently produced films shown at the Riverfront Library in Yonkers has grown into an event that spans eight days and six locations, and now includes Oscar-winning filmmakers and venues in three communities. The venues have also grown to include Sarah Lawrence College and Alamo Drafthouse.

Get your tickets and learn more about the festival below:

2.) Ericka Hart, 30, is a “cancer warrior.” In an effort to raise awareness for breast cancer and reclaim her sexuality, she recently went topless during Brooklyn’s Afropunk Fest after having a double mastectomy.

Not only is this New York woman brave, but she is?exquisitely beautiful. Learn more about Hart below from Mail Online:

Ericka Hart, 30, from Brooklyn, New York, went topless to Afropunk Fest to encourage discussion around the issue of breast cancer The survivor was diagnosed with bilateral breast cancer in May 2014 aged 28 and now has the all-clear She has been inundated with messages of support since sharing pictures

Some of the money for the rinks is already allocated, the rest of it will be included in Astorino’s $300 million capital proposal VALHALLA – Ice skating and hockey could be coming back to the Kensico Dam Plaza’s reflecting pool.

SOUTHEAST, NY – The 81-acre Garden Recreational Preserve is now permanently protected thanks to an ongoing collaboration between the Putnam County Land Trust and the Westchester Land Trust. Named in honor of the family that generously donated the property, the Preserve has been owned by PCLT and managed as a public sanctuary since 2014.

Scientist Seeks To Cure The World’s Most Dangerous Viruses

WESTCHESTER COUNTY, N.Y. — Research scientist Rong Xu has dedicated her career to finding cures for some of the world’s most dangerous viruses including HIV, HCV, Malaria and Ebola. That work eventually led her to Profectus BioSciences Inc. in Tarrytown, where she leads a team that designs experiments and uncovers some of the biggest issues facing the anti-bacterial and anti-virus world.