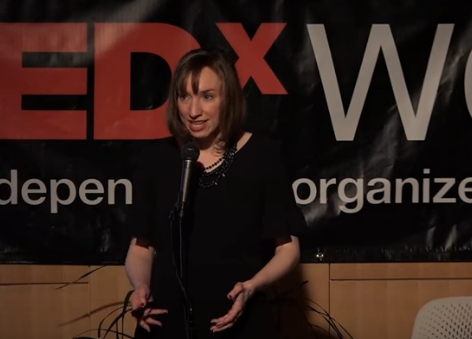 Want to be successful, happy, and awesome at life? Here’s some advice from a Westchester Woman.

When Sherry Saturno wakes up in the morning, she sees a scar under her chin. The mark was left after another student split her chin open when she was young.

“For many years, I was bullied, and if you’ve ever been that kid who was always made fun of, had food thrown at you in the cafeteria, or dreaded going to school every day, then maybe you can relate,” the award-winning social worker said during a recent TEDxWCC talk title “Use Your Broken Heart to Find Your Greatness.”

Her teachers also told the Tarrytown resident that she would never graduate high school. A few years after that, she went on to earn a master’s degree from Columbia University.

As a social worker, Saturno now fights bullies every day. But she wouldn’t be able to do her heartfelt work if it wasn’t for the adversity she once faced.

“Contemplate the notion that you could use your pain as a catalyst to change your life and leave your past behind,” Saturno says.

Saturno says that we can take the worst moments in our life and turn them into a source of strength and motivation to do great things. As a social worker, she has seen people react to hardship differently depending on their circumstances.

Some people give up, others feel like they have nothing to lose and turn to crime, and some turn to drugs and alcohol to escape or numb the pain.

“Every once and a while, you’ll find someone who holds onto the pain and does something remarkable with it,” she explains.

She says that adversity and rejection have been the source of countless success stories by those who’ve transformed their struggle into motivation, resilience, and originality.

“Our stories and our struggles make us uniquely who we are, but too often, out of shame or fear, we silence the very narrative that is the foundation of our strength,” Saturno explains.

Saturno finally became sick of the insults, the degradation, and the naysayers who always told her she would fail and decided to tune them out. She knew that if she let their voices in her head, what they said would have become her fate.

Instead, she decided to take her pain and use it to motivate her to achieve greatness. Saturno holds a second master’s degree from Long Island University, is a Diplomate in Clinical Social Worker, and is a Stanford Certified Project Manager who graduated from a national post-graduate fellowship at New York University Silver School of Social Work.

Saturno says that she wouldn’t have been graced with compassion and perseverance had she not endured the struggles of her youth.

“Your story the source of your struggle is your power, so take a look and find your quirks and your traumas and find your own greatness because it’s been there all along,” says Saturno.

We all have scars, Saturno says, but it’s what we do with them that counts.

You can watch her full TEDxWCC talk below: