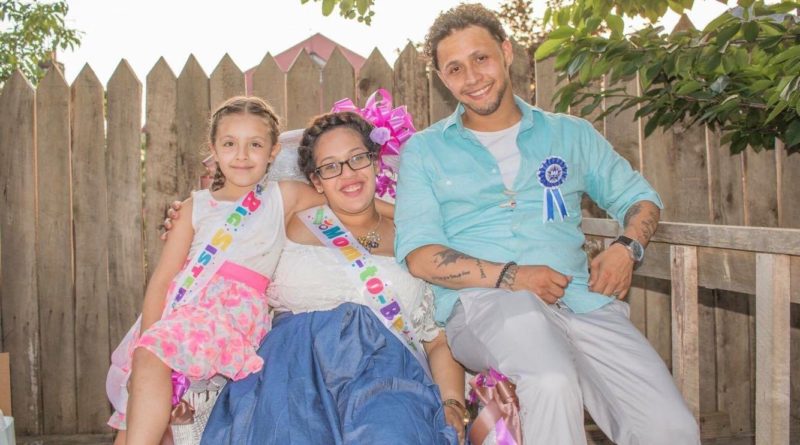 Hector Santiago says he went from being a gang member and homeless, to working with local law enforcement and mayors across to the country to improve community relations. Hes endured adversity, and says he?overcame it all for the love of the women in his life.

I did it for my daughter and for my fianc?, explained Santiago, the founder of Stop & Shake. The love I had for them made me change.

Santiago explains that his struggle started as a child when he was bullied for having alopecia. That experience, he said, is what contributed to him becoming a gang member for a 10 years.

I kind of became the bully out of being bullied, Santiago, 28, a native Yonkers resident explains.

He began selling drugs and hanging out with hardcore gang members, but eventually Santiago decided to change.

I realized how deep my culture was the way I spoke, the way I acted, says Santiago. Little things that may seem alright, can be completely wrong to this little girl [his daughter] in future years.

I realized I had a passion for community and really pushing community building and social activism, Santiago told Westchester Woman. I realized I was more of an activist at heart, rather than just a business owner. I wanted to encourage youth to step outside bubble, and do something better. I wanted them to say, If Hector can do it, it does work.

He was also approached by a sociology professor who was inspired by Santiagos ability to connect with those that he mentored and asked him to speak in front of his class.

It was supposed to be a half hour lecture and it turned into a two hour lecture, some of the kids were crying, recalls Santiago. It was amazing.

The professor was so blown away by Santiagos energy that he asked Santiago, who had only received his GED at this point, to conduct a one credit workshop for the College of Mount Saint Vincent. Santiago went home, Googled what a syllabus was and created an amazing one for his workshop. Hes now a studying sociology at the College of Mount Saint Vincent on a full scholarship.

In 2014, individuals in his community were threatening to riot over Yonkers stop and frisk tactics around the time of the deaths of Mike Brown and Eric Garner. Santiago was determined to keep the peace and came up with the Stop & Shake.

Stop & Shake Breaks Stereotypes One Hand Shake at a Time

The Yonkers Police Department was the first to implement the Stop & Shake where police officers, business owners and residents shake hand with and talk to people in their community to improve relations. Mount Vernon just implemented the program, and New Rochelle and other U.S. towns are also looking to implement the Stop & Shake program. Santiago is taking his campaign nationally by the end of this summer.

But getting to where he is now?wasnt so easy.

Santiago was homeless while launching the Stop & Shake and would spend the night sleeping on the streets, then go to a friends house to shower and change into a suit before meeting with mayors and other public officials. But no one except Santiago and his close friends knew this.

I had things against me and I still fought through that, said Santiago.

Santiago says its his struggles that have helped him to get where he is today. When Santiago was thrown out of his house as a teen, he lived with families from all different cultures. This helped him to identify with people from all backgrounds, which helps with his Stop & Shake and community building endeavors.

But what really helped him learn about equality was having a child and being in a relationship with his fianc?. Learning to have compassion and understanding for his child and partner allowed him to understand and be compassionate to others.

I hope to inspire my daughter, as a woman, to do everything and anything she can. No matter what society says. The biggest reason I do half the things I do is because I want my daughter to know she is a bold, strong woman.

Santiago is encouraging his daughter to reach her highest goals with his own aspirations of running for mayor and doing a TED Talk.