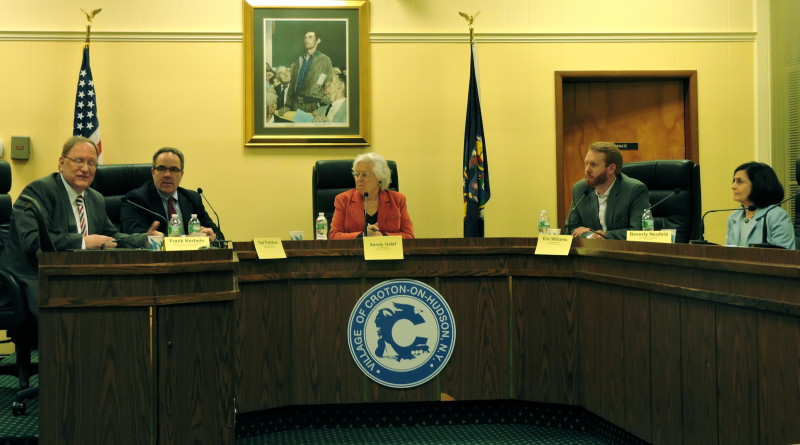 New York may soon afford both men and women the ability to act as caregivers for their new child and sick relatives, without going broke or making do without pay.?Bills that would create a paid family leave program in the state are making their way through the Senate and Assembly for consideration in New York State’s budget this week.

“I think?you can understand what a complicated issue it is for us,” said?Assemblywoman Sandy Galef. “It’s always important to hear from the business community.”

Galef held a forum in Croton-on-Hudson Thursday to discuss the pros and cons of the legislation. 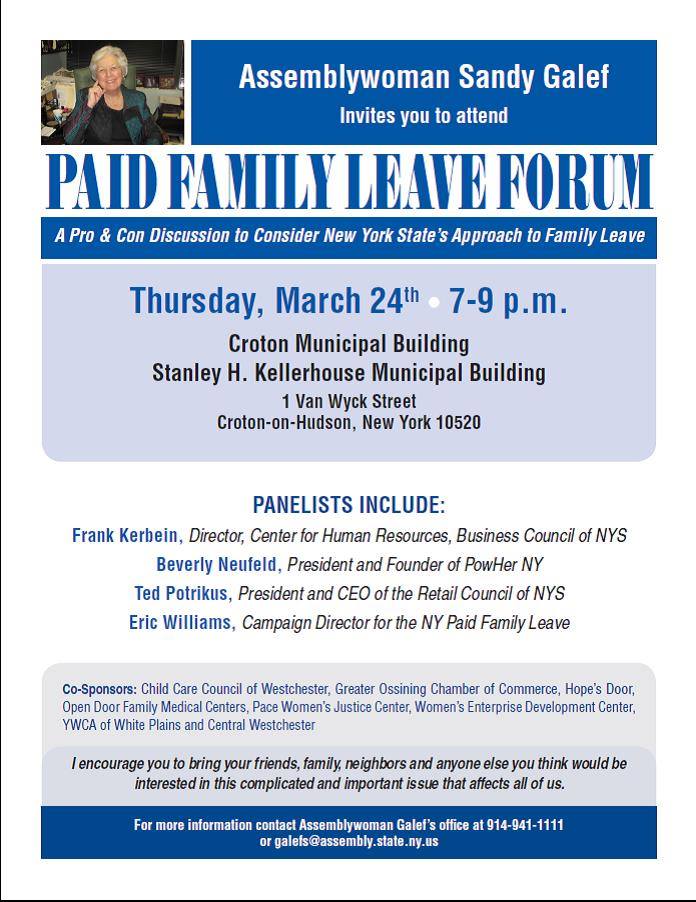 There are different?versions of the bill circulating through Albany, but heres the gist of how it will work:

The bill would allow workers 12-weeks of paid leave time, which would be granted to employees who were employed for at least four weeks. Workers would be paid two-thirds of their paycheck, or up to half of the states average weekly wage.

Its costs would be covered?by charging all employees between $.45 and $1 from their pay each week. It would also use New Yorks Temporary Disability Insurance (TDI) to cover the rest of the costs. Employers would not have to pay their employees while they are on leave. There is concern, however, that the?program may increase TDI costs that are paid by employers and employees.

Legislators are still negotiating on the specifics, but intend for a version to be in the budget by April 1.

Right now the Federal Family and Medical Leave Act provides 12 weeks of unpaid, job-protected leave to care for a newborn, adopted child or sick family member. To qualify,?workers must work for any employer with 50 or more employees,?have clocked 1,250 hours in the past year and have been on the job for a year.

The U.S. is one of three countries that dont mandate any kind of paid family leave. However, some states like California do mandate?it. Employers like Google and Facebook offer paid family leave benefits to retain and attract employees, and encouraging their well-being.

Here’s how the U.S. ranks in maternity leave alone:

Our members made it clear they want us to be in opposition to the bill, said Frank Kerbin, the director for human resources at the Business Council of New York State.

He said the business members of his organization are concerned that business will have to foot the bill for extended replacements while their employee are out on leave. This, along with administrative requirements, would especially be burdensome for small businesses.

There is no way a small business could be in compliance with this law as required, said Kerbin. I think it would be a burden for employees to cover, especially my four-people pizza place.

He was skeptical on the financial projections and was concerned that paid family leave would increase insurances costs and cost employees more than just $1. Kerbin also argued that four weeks was too short of a period to offer a benefit.?Others in opposition or in the middle of the paid family leave argument suggest that smaller?business be allowed to opt out.

Sixty-three percent of women who work are a major bread-winners in their family, and their families are really depending on those salaries, said Beverly Neufeld, the president and founder of PowHer NY.

If were ever going to get to a point where there is some equality in the system, we have to address this in some way.

Neufeld explained that many women, especially those with low incomes, cant afford to take time off to care for a child or sick family member. These women face losing their pay (which may be their familys only income) and fear losing their jobs (as FML doesnt apply to all part-time workers).

Sadly, motherhood is one of the key indicators for poverty for women in New York, said Neufeld. In the U.S., the price of motherhood should not be poverty.

Neufled said research shows that increasing bonding time is critical for healthy development; preventing illness and mortality rates; and postpartum depression. It also allows men time to nurture and care for their loves ones.

“We hope it’s going to equalize things and making caregiving a human quality, not just something women do,” said Neufeld. “I think it’s important to creating a more equitable culture.”